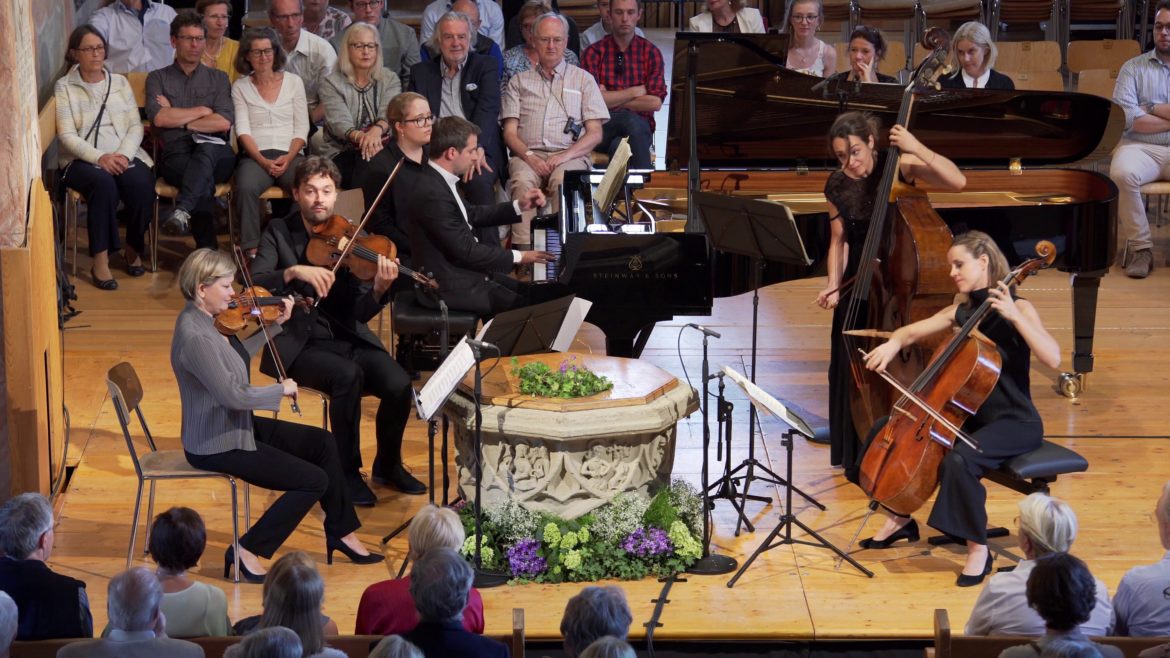 The Trout Quintet by Franz Schubert

Performed on August 3, 2019 in the Saanen Church

Rather unusual forms of ensembles sometimes bring together great musicians to a remarkable unity. In this performance of Schubert’s Trout Quintet as well as the Piano Quintet in F Minor by César Franck, Alina Ibragimova, Charlotte Saluste-Bridoux, Lawrence Power, Sol Gabetta, Uxia Martinez Botana and Bertrand Chamayou share the stage inside the beautiful Saanen Church. Bertrand Chamayou, Artist in Residence of the Gstaad Menuhin Festival 2019, had earlier performances at the festival in 2014 with Schubert arrangements by Liszt as well as in 2016 with pieces by Ravel – this time, it’s the perfect opportunity to perform an important, but unfortunately not that often played work by his compatriot César Franck. The Trout Quintet of Franz Schubert is much better known. In contrast to Franck’s instrumentation with two violins, it consists of a classical string trio plus double bass, played by Uxia Martinez Botana in this performance.

Schubert based the for his Piano Quintet in A Major eponymous variation movement upon one of his own songs, “The Trout”. While the transformation of thematic material was characteristic for the variation technique of his contemporary Beethoven, Schubert demonstrated his musicianship in the almost unlimited decorating and «playing» with the thematic material. Another special feature: With every variation, the theme sounds in a different voice. The opening of that famous fourth movement is made by Bertrand Chamayou, followed by Lawrence Power and Sol Gabetta – for this very reason, the music appears in an ever-changing, colourful variety.

French chamber music in a state of exception

As a trained piano and organ player, César Franck received recognition above all for his organ works as well as his Symphony in D Minor, which had an enormous influence on the French music in the Romantic era – however, the Piano Quintet in F Minor also has a monumental character. While Schubert’s Trout Quintet ends in a highly cheerful and dance-like manner, Franck’s Piano Quintet first searches for its direction – to put it simply, the piece is not that catchy while listening to it for the first time. Contemporaries of Franck were in complete agreement that the piece even exceeded the legitimate boundaries of chamber music. The Piano Quintet certainly is not inconspicuous, but rather comes across with bold expressiveness: During the course of the three movements, the brilliance of the piece is revealed more and more clearly through innovative approaches to harmony as well as ingenious combinations of musical elements that at first seem to run in complete opposite directions.

You couldn’t have come up with a better name for Sol “The sun” Gabetta. She’s as radiant whenever she takes the stage, as when you meet her backstage. She’s kind and generous with her time. For nearly two decades Sol Gabetta has been a leading presence at Gstaad, having become something like the festival’s ambassador. Every year we are blessed with her new projects, often in form of world premieres.

We all heard about her great career, but little is known about how it started. Once at Saanen Sol Gabetta shared with us the following story: «I was three years old and my brother Andrés was eight. My parents gave both of us a violin. But – of course – Andrés played much better, because he was much older. However, one day I was offered cello lessons.» Thanks to the Suzuki-method Sol made very soon great progress. «I immediately sensed that the cello was right for me. It feels more natural than the violin. I’m small and have huge hands. We all have bear paws in our family. I can’t fathom how Andrés manages with his violin.»

Cappella Gabetta – For the Love of Old Music

So the years passed and the each of the siblings found their own way. «After Andrés got his diploma, he met Christophe Coin (the great cellist who specializes in the so-called period performance. He immersed himself in the Baroque Music. And even though I followed his journey with keen interest, I focused on the grand concert repertoire… up until I discovered the old music myself. That was whilst I was working on the first «Progetto Vivaldi» for Sony.»

Sol’s interpretation of Vivaldi, the so-called «Red Priest», was a huge success, so that Sony immediately wanted her to do another record. And Sol Gabetta realized that this would allow her to collaborate with her brother: Thus, the Cappella Gabetta was born! And from then on, the Cappella Gabetta became a regular at the Gstaad Menuhin Festival.

I live in Gstaad for part of the year and very much enjoy many of your performances. Thank you for the live-streaming. Angelika Hahn

Im really happy to be part of your audience and enjoy such a marvellous music and musicians. My love here from Baires Argentina. Regard Gris

Thanks a Lot I really liked and enjoyed this concert. Greetings From Buenos Aires ♥️♥️♥️🍾🥂Argentina